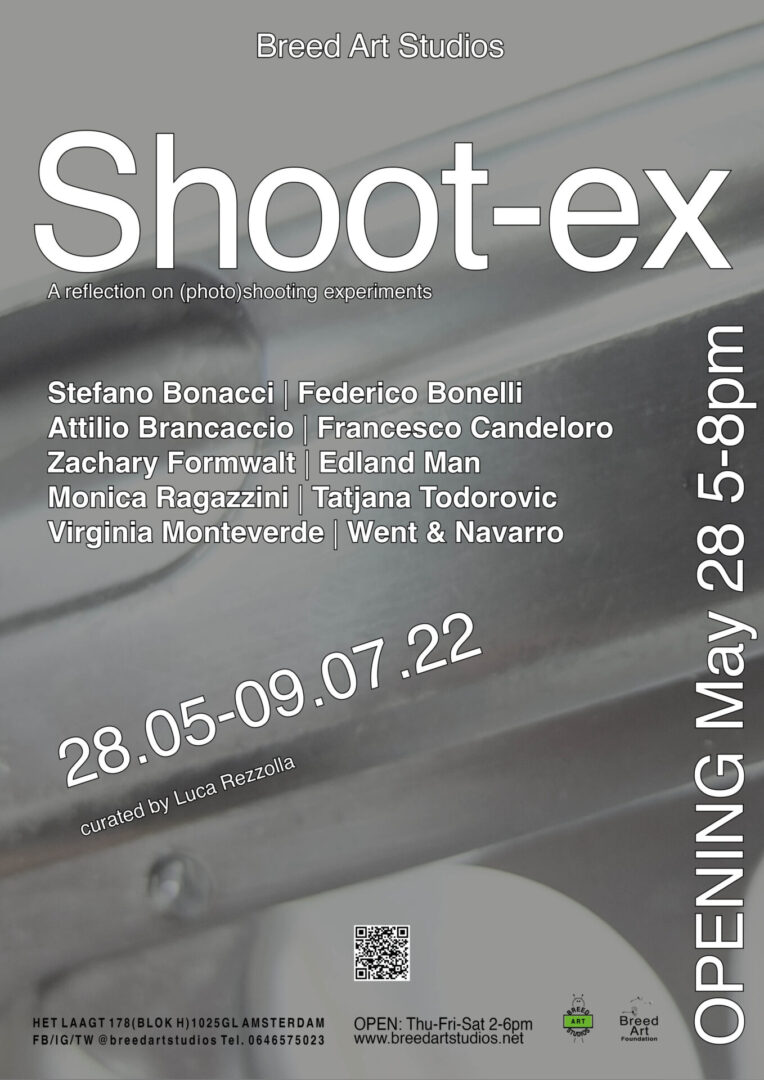 The photo can be an instrument to capture reality, but what happens if we do not like what we see?
In a time where shootings become more and more usual in media communication worldwide, Shoot-ex is an exhibition focused on the unusual (photo)shootings, the experiments.
Ten international artists are invited to show old and new photo artworks, based on their curiosity to explore different techniques.

The ‘Piazza Affari’ series consists of anonymous portraits of businessmen photographed on the street without them being aware of it during their lunch break in the centre of Milan.
The city famous for fashion but also as a centre of business is reflected in the movements and faces of these men.

Francesco Candeloro
“The Times of the Light” ed. 1/7

Photogram:  a photographic image made without a camera, placing objects onto the surface of a light-sensitive material, and then exposing it to light.

Made in the darkroom by exposing the photographic paper directly to the enlarger’s light while covering it with masks at various times.

Two composite photographs, each made up of over 2000 photographs taken on the construction site of the Shenzhen Stock Exchange.

Tatjana uses blurs which she achieved with ‘out of focus’ and ‘long exposure’ techniques.
In her works, they represent an ethereal nature of the world as well as a way of communication with the viewer.

The original shots are mixed using a deterministic algorithm. While remaining similar to itself, the picture is constantly changing in unpredictable ways. Every look will fall on a unique and unrepeatable configuration. The shots were taken in the spring of 2022 between the north of France and the beach of Alassio in Liguria.

“On the grain of a closed door, as if hung up and constantly scratched away, random and unconscious moments flow in the sunset of
an obsolete civilization. The door stays closed.”

Went & Navarro
Went & Navarro are imagemakers. With their commissioned as well as their non-commissioned work, there is always an ongoing search and longing for materiality and tactility in the image. You could say their playground is the gap or overlap between image and object; both analog and digital as well.

Wet Plate Collodion Photography
In October 2011 they started The Tintype Studio, a hands-on photography project, using the Wet Plate Collodion technique (from around 1850). It was not intended as so, but this seems to create the perfect balance between their (mostly) digital work and their designer fascination for the material object. What started as Arjen Went’s awkward fascination, has now become an ongoing project that encourages them to make images AS objects.

Cyanotype
Next to that Manon Navarro moved more to handcrafts and skills. She educated herself in printmaking, specifically direct printing techniques like blueprinting resulting in so-called cyanotypes. Working on XL cyanotypes for the last three years, making photograms of existing objects (flowers, plants and so on), she‘s now in the search for more abstract, layered and folded shapes. Now the chemical part of blueprinting is under ‘control’ it is interesting how she manipulates shades of blues so they’ll become more deteriorated (Bluefilter series). At this point, she is more attracted by abstract and graphic subjects referring to nature rather than existing subjects from nature itself.

We use cookies on our website to give you the most relevant experience by remembering your preferences and repeat visits. By clicking “Accept All”, you consent to the use of ALL the cookies. However, you may visit "Cookie Settings" to provide a controlled consent.
Cookie SettingsAccept All
Manage consent

This website uses cookies to improve your experience while you navigate through the website. Out of these, the cookies that are categorized as necessary are stored on your browser as they are essential for the working of basic functionalities of the website. We also use third-party cookies that help us analyze and understand how you use this website. These cookies will be stored in your browser only with your consent. You also have the option to opt-out of these cookies. But opting out of some of these cookies may affect your browsing experience.
Necessary Always Enabled
Necessary cookies are absolutely essential for the website to function properly. These cookies ensure basic functionalities and security features of the website, anonymously.
Functional
Functional cookies help to perform certain functionalities like sharing the content of the website on social media platforms, collect feedbacks, and other third-party features.
Performance
Performance cookies are used to understand and analyze the key performance indexes of the website which helps in delivering a better user experience for the visitors.
Analytics
Analytical cookies are used to understand how visitors interact with the website. These cookies help provide information on metrics the number of visitors, bounce rate, traffic source, etc.
Advertisement
Advertisement cookies are used to provide visitors with relevant ads and marketing campaigns. These cookies track visitors across websites and collect information to provide customized ads.
Others
Other uncategorized cookies are those that are being analyzed and have not been classified into a category as yet.
SAVE & ACCEPT